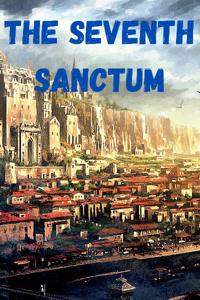 Alder is a fifteen year old street urchin in the capital city of Venlan. His life revolves around a singular task: find something to eat today. That’s all he cares about. But when he steals the purse of a mysterious woman, he finds himself entangled in an insane plan. An insane plan that, if it works, would make him very, very wealthy.
In the queendom of Venlan there are six established Sanctums each dedicated to the sole purpose of finding and training the Chosen Children, those blessed by the Goddess Ven with great, but restricted, powers. The students of the Sanctums battle each other every four years in a grand tournament for the prize of the Queen’s Favor, an unfathomable amount of funding from the government. For the past century, the Sanctum Numeron has always won.
The plan? Create a Seventh Sanctum to defeat Numeron for the Queen’s Favour.
What could go wrong?