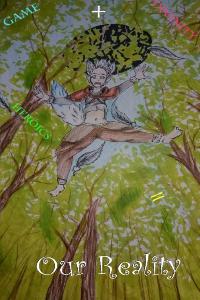 Everyone has their own reasons, be it past events, personality or simply company.
But most at some point divulge themselves into videogaming, be it for entertainment or more compettitive reasons.
In this year and age there are many genres of gaming, one specific genre though still holds on tight to the ledge it was pushed to trying to pull itself back up. MMORPGs were once the top of everybody's list, adventure, combat, storytelling and endless grind in one single game. It was a different life for most, as if a parallel world to our own.
You could be a knight indulging yourself in combat, a mage expertly crafting spells of mass destruction or creation. A ranger exploring the land and hunting down prey, an assassin completing contracts and hording the spoils. A troll scamming children out of their hard earned 10 gold and making more hardcore players rage quit for the day.
Or something else.
Kyle was a simple player, he always picked the strangest classes or jobs and his characters almost looked the same. He played for the combat, he played for the grind and he played for his guild but above all he played for the story.
Kyle is a roleplayer, one who enjoys the simple parts of this virtual life. Whether his guild was starting a war or ending one he'd always have his drammatic entrence or exit, his decleration of annihalition or demand of surrender.
After all that? He divulged himself in the game's story, the interaction with NPCS (Non Player Characters) and their advanced AI.
He went through many questlines, many tales of heroics and many more adventurers of legend but one thing always remained true with his character.
Kyle absolutely loved to the play the villain.