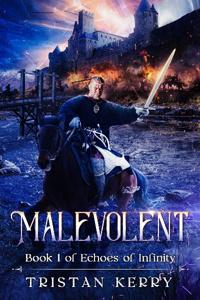 The gods tore the world apart. Now magic is carefully controlled.
As a recently graduated Mage from the Citadel, Marek upsets many when he decides to go on the frowned-upon World Tour. Intent on creating a mercenary company, Marek discovers an incredibly powerful object that will change the world.
Once the Captain of the Citadel's Guard, Wyatt is now a mercenary and Marek's second in command, a position he knows will eventually force him to make a difficult and life-changing decision.
After escaping her family’s efforts to marry her off, Ako is swept up in an adventure of a lifetime. Forced to evolve, Ako discovers that becoming a warrior is not without cost.
Malevolent is the first book in Echoes of Infinity, an epic fantasy saga full of magic, battles, and twists and turns that will stay with you long after its shocking conclusion.

Author's Note: Malevolent: Book 1 of Echoes of Infinity is complete at 54 chapters and approximately 130k words. It's also around 2.4k words per chapter. No matter what happens, I'm in this for the long haul and you can expect the same level of quality each chapter.
Update Schedule: I'll be releasing 13 chapters week 1, with subsequent chapters released on Tuesdays and Thursdays at 4:15 PM EST. I'm currently working on Book 2, which should be ready by the time Malevolent is fully published.
Cheers!
Tristan Kerry