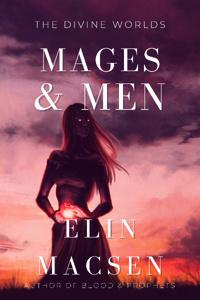 Two worlds. One dark, one light.
A delinquent spy meets an undead sorcerer.
In November 1943, Evelyn Gant falls through an Antarctic chasm to another world. Her mission is clear: complete her diploma in magecraft after expulsion from Cambridge, find the missing spies who preceded her, and glean any information that will help her brother fulfill the prophecy that shattered the sky at his graduation.
Instead, she stumbles upon a war criminal in hiding. Nikola Soren is officially dead, assassinated seven years earlier. What she takes at first for necromancy is something else: ancient magic carved in runes.
Soren is nothing like what she expects. Neither is Hesper, the second world, where magic is brittle and wrested from nothing without the many restrictions found in Impera. The professor’s gift of a slender volume on runic magic gives her ravenous mind an irresistible puzzle. She must choose: learn from an enemy or sabotage her brother’s chance of success.

In a world of witches and wizards, spies and secrets, magic and prophecy, anything is possible. Even a fated fantasy romance between two natural enemies...