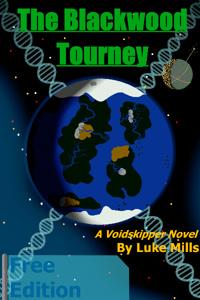 Blackwood is a planet with a… unique claim to fame. It’s a playground for irresponsible bio-engineers to whip up the most horrifically dangerous organisms they can think of, and release them into the wild with no thought to the ecological consequences whatsoever.
Yures Hann is one such bio-engineer, living on Blackwood’s moon Bark. Well… a bio-engineering student at least. They’ve been studying at one of the many universities dotting Bark, but recently they’ve hit a snag.
That snag is Professor Thonne, who took his personal hangups out on Yures’ grades. To get their academic progress back on track (and avoid ever needing to take a class with Thonne again), Yures has registered for the annual bio-engineering competition.
The Blackwood Invasive Species Tournament, to be precise.
This Story is being crossposted to Scribblehub.