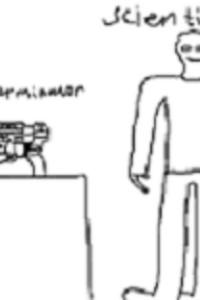 Joseph a celebrity in his own world. Got banished by the so-called gods (scientist) due to his arrogance and ego, he was hated by some people. Among those, he angered a scientist. quite a poor lazy scientist, but nonetheless a scientist. so this scientist wanted to punish him, but he didn't know how to do it since he was poor. but he soon remembered a failed experiment he did some time ago. He picked up the exterminator which shoots concentrated radiation. but this was too weak to kill that guy so he found a way around the problem and beamed him to death, literally. After that, he was sent to some other world by the gods