The Aroma of Blood 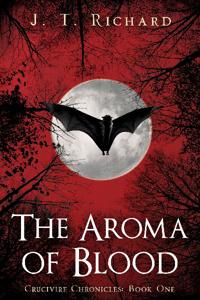 Alice Hayes is haunted by the disappearance of her brother. The morning after a sleepover, the family he was staying with was found dead, and Arthur gone. The most twisted part is that someone dressed up their murders to look like vampires did it. It has to be that way. Vampires aren't real.Years later Alice is a Detective for the City of Saint Vivia Police Department, and has attempted to put her brother's disappearance behind her. When a similar murder to the one from her past is committed, Alice sees a chance to get some answers. But soon more and more murders are committed, and Alice is confronted with a horrifying reality. Vampires are real, and her brother is alive. And though he isn't a Vampire, he's not the same little boy she grew up with.