Ivan and the Black Riders 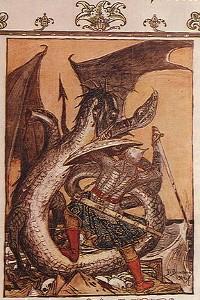 Petrov the Dragonlord rules an ambitious new kingdom from atop a mountain. It's said he and his sister were once fully human, and that he can grant youth and the body of a wolf to those who prove their loyalty. Ivan is willing to kill in the Dragonlord's name, but is there a limit to how much "glory" and "progress" he can stand?
(Contains violence and other disturbing moments, but not explicit sex or gore.)