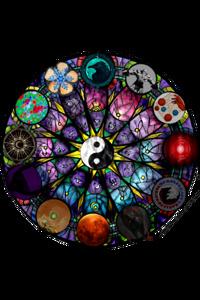 The catastrophic failure of mankind to harness the power of the extradimensional Abyss unleashes a spreading corrosion of reality itself. In response, the gods born of man enact a plan to gather 12 heroes to investigate on their behalf. As each are gathered in turn across different worlds and times, opened doors only invite the confluence of countless factions and powers in a mad scramble for dominion over all others.
Polluted cyberpunk dystopias, fantasy castles, ancient lost worlds and alternate histories - one thing is common to each of the gathering Forged Ones - they have no idea what they're doing.
What happens when you shove characters of wildly different origins, genres, tones, and power levels together?
Probably exactly what you expect.