The Chronicles of Conclave - Unmade Under Fire 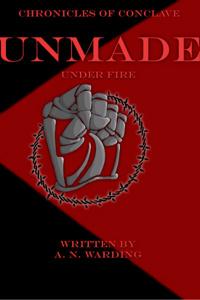 Undesirables. Rebells. Traitors. Pirates. Terrorists. These are just a few of the words used to describe the people of Conclave. It's populace formed from the ever growing numbers of criminal deportations from the Central Systems to the Rural Relocation Colonies, or RReCs. The term 'criminal' was an umbrella term, used to descibe both actual crimes against the government and citizens, as well the crimes of expensive and incurable illness or financial failure. The Conclave was birthed from these people, and now fight for universal basic rights across all planets, species, and cultures.
At the head of Conclave, the six founders stand as leaders and figureheads. Sadah, Vorn, Citram, Vidian, Maclin, and Vector. With lives and families being ripped apart, the Conclave is pressing harder than ever for change.
A mission to retrieve a lost Conclave weapons goes awry, costing the Conclave far more than they ever feared. Saedah must now fight a different battle. Willpower is all he has left, and that can only last so long.
Against the darkness, we fight.
WE ARE CONCLAVE