A Flight of Broken Wings 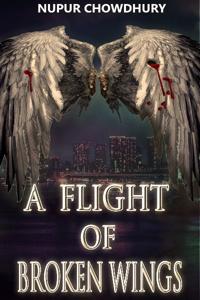 Six hundred years ago, humanity rose up in revolt against the Aeriels, who were driven from earth and back into their homeland of Vaan after a bloody and glorious war.
Eight years ago, Ruban's home was destroyed and his family murdered by an Aeriel.
When a new Aeriel threat looms over Ragah, the capital city of Vandram, Ruban Kinoh must do everything in his power to avenge his family's past and protect the future of his country.
Which is hard enough without being saddled with a pretty and pompous aristocrat, who seems as useless as he is vain.
Faced with a conspiracy that might cost humanity its hard-won freedom, and accompanied by the bejeweled and glitter-clad Ashwin Kwan, Ruban begins his journey into a land where the past and the future intertwine.