Even I Don't Want to See the World Burn Down: Rank SSS Demon 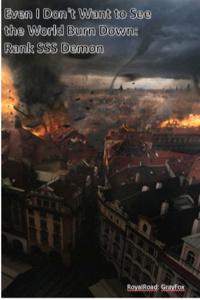 A very powerful demon nicknamed "Amethyst" has been alive for over 1000 years, wreaking havoc and chaos in the world per her nature. For her though, the last couple hundred years have been rather boring until one day she finds a half elf half devil child. And she decides to raise it in a human city disguised as a devil herself.
But the world is not peaceful despite Amethyst's lack of action over the past couple of centuries. Technology has progressed substantially and everything is powered by mana and of course, there's not enough of it to go around. The increased mana usage as well has caused some interesting and problematic things to occur as well. What will Amethyst and the rest of the world do to make sure it doesn't burn into a hellscape?