Memorabilia of the Iron Princess 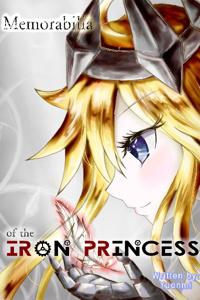 Within the darkness below the Earth’s desecrated surface, an android soldier awakens from her sleeping pod, ready to take the place of her fallen predecessor in the thousand-year war between mankind, and the hordes of monsters roaming across the land.
The 11th unit in an army of 100, she is one of the most analytical and destructive weapons ever created. But when the central server is mysteriously crippled from the inside, God Gier 11 finds herself emerging into a world changed beyond her recognition, clueless as to how it came to be. And before she can question why coffee no longer exists in this strange, new place, she stumbles heart-first into a gorgeous elf with a smile that makes her head spin, a crazed vampire claiming to be a relative, and an ancient conspiracy that threatens to unravel the fate of humanity and everything 11 thinks she knows about herself.
Caught between duty and freedom, waging war and pioneering the first cappuccino, 11 must make full use of her newfound autonomy and do everything she can to uncover the secrets of her past, and save the people she has come to care about.
But without the excuse of being an emotionless machine, will 11 be able to cope with the truth of what she really is, and the things she has done?