Emperor Who Rules Over The Swords 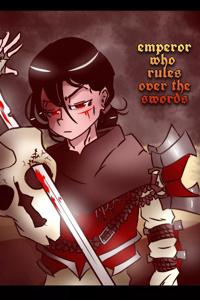 Ya can access me on discord - Emeruferuu#3413
Synopsis
Professional gamer for about five years length, his name was Cayle Mischieve.
Upon his novice career in the early days, he was one of the top newbies, but halfway through his career, he plummeted deep into the bottom cycle.
As he was scrolling through pages of games he wanted to change career as an invitation came surfacing.
When he opened the mail that was sent to him, he was sent to an infamous site. Despite that, the title of the game called, “Magic And Sword Online,” caught his attention and got him curious.
As he scrolled deep into the page, at the end of the site, there was a download button…
Upon downloading the game, he was welcomed by a log-in button, without a sign-up option. The moment he clicked on the log-in button, a word immediately showed up on his screen, [Are you ready to enter a new world?]
Upon choosing the [Yes] in [Yes/No] options, Cayle suddenly lost consciousness as his whole field of view began to darken. Soon, he died on the spot due to a heart attack as he felt his heart stopped beating.
In the endless stream of the void, Cayle reached out his hand to grasped through the endless void wanting to continue living.
The moment he woke up, all his view was filled with grass landscape, as a light visible chart appeared before his eyes.
Cayle’s mouth agape as he read the content of the words embed to it, [Congratulations on being chosen as the user for the new life system]
What kind of future awaits him through this new life he had gained.
Cayle embarks on an unbeknownst journey in front of him, in an attempt to know the roots of who sent him to the world he got reincarnated at.