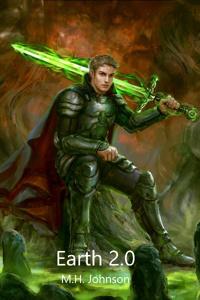 Before you lies a gate, humming with all the power of a dying civilization now less than a city block wide as the Big Rip proves to be every bit as horrific as the doomsayers had promised, the end coming trillions of years sooner than anyone had predicted.
Behind you are the desperate shrieks and screams of a thousand people hammering at the bulletproof panes securing your company's laboratory, all of them desperate to escape the encroaching hellscape of a world tearing itself apart all around them, Earth's final bastion of stability dissolving, no matter how fast the dying technicians hammer away at their keyboards above.
Just beyond the destabilizing wormhole you can make out the peaceful blue skies of a world unlike any other.
A world creative by countless AI algorithms, using the final death throws of one galaxy to forge another anew.
A world where you truly can level up and explore endless adventures, in fractal worlds literally without end.
An eternity at your fingertips...
But only if you have the courage to stride between universes. To jump through the gate before you.
Why are you hesitating?
People are clamoring behind you!
Hurry! The gate's about to collapse. The final remnants of humanity have just broken through the barrier!
Shots fired!
The technicians have just been gunned down to the last man!
The doomsayers are now firing into the crowd behind you!
What will you do?