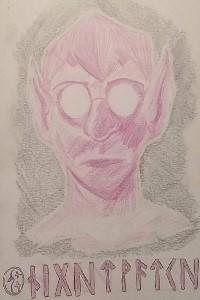 Long ago, all of the races and creatures of the worlds lived together in unity. Elves, Giants, Humans, Dragons, Sprites and so on all cooperated and helped one another build up their societies under their respective Gods which had brought them into existence. Forever back, this existence stretched, until one day, the race known as Human began to hide away from the others, having discovered the idea of Technology.
This Technology, when fed with thought and insatiable resources, made their lives easier and easier. Only, had they dedicated themselves to Magic, their lives too would have been made easier. But this difference in their ways made them feel more powerful and important. So they continued to develop their Technology until the demand was so great that they took from others and claimed land that was the home and nourishment of other races.
They dammed up the rivers and cut the forests and mined out the hills and mountains until eventually, it seemed that the Humans would consume all of the land and there would be nothing else but Humans left. Before a conflict could erupt, as it would have and left untold deaths on either side, the Gods intervened.
They split the world in 9 smaller worlds, each of them to be given to a particular group of races. Midgard, however, was given only to the Humans for it was a prison. They could stay there and do whatever they pleased, be it Technology or Magic, only they would slowly forget all they knew of the World Whole and the creatures and races they had once called friend.
And so it passed the the Humans were cast out and bound in Midgard as a dangerous animal is into a cage. As predicted, they forgot the truth and labeled their memories as fairy tales and myths. Sad but relieved, the other races replenished and undid the damage caused by the Human arrogance and greed, their existence all but forgotten by the very realms.
In this way, another long time of peace fell over the realms - other than Midgard, where Humans endlessly found new means and reasons to kill and hound each other and the very land itself. It seemed that they would burn out and Midgard would join Niflheim as a world of emptiness and death. Only, before the races could see that come about, they had a new problem to contend with.