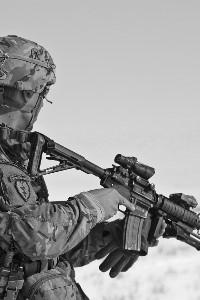 As corporations grew and government debts skyrocketed, the balance of power shifted.
Giant conglomerates formed from merged megacorporations came to own most property on Earth, as well as control of utilities and politics. For decades, the corporations pretended to follow the rules of the countries they were based in, but slowly the charade came to an end.
In a series of business deals, the vast majority of countries ceded their territories to these conglomerates leaving only a few nations remaining, though none of them remain unscathed.
In North America, The United States has been reduced down to the size of its original thirteen states. Poverty and crime are running rampant throughout the remaining territory as the government struggles to keep control. To the west, The Midwest Reclamation Corporation uses its PMC and Corporate Espionage divisions to sabotage and destroy the remaining power of the government. In this new age of warfare, a new force is needed to defend freedom.
And so R.A.D.E. was formed, Recon Assault Demolition and Espionage. An elite force of soldiers dedicated to preserving the freedom and dignity of the remaining territory.