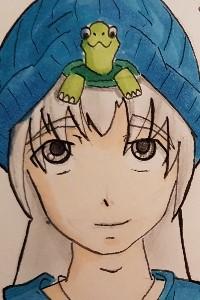 Yzer, a adolescent human, is a a full contact mage. That means that in contrary to "normal" mages he can fight on the front line. he uses magic to transform his body to fight evil powers that grow stronger each day. Knights, warriors and mages consider this type of magic taboo. Actually all other types other than healing magic is taboo and therefore forbidden, with the exception of creating magic items. Which is only done by archmages under the supervision of the king himself. They who even consider using this type of magic should prepare to face the consequeces.
This wasn't always the case, after the last great demonwar. When the Archdemon was defeated and his army of magic using demons was slain. The king suddenly started to promote "Anti- demon magic" propoganda. "Demon magic" users were arrested without good reason. Unless they let their magic be sealed they were held captive or worse.
Yzer his master Doman, A great "demon" magic user, noticed things going sideways before the magic users were hunted down. He retired from the royal army to live a secluded life in the forest of Fargo with his young apprentice Yzer. There they continued practising their art, hopefull that one day the king would see the error in his ways. That "demon" magic isn't evil, weak or dark. But that magic in all forms can be used to fight the forces of evil
But everything changed when one day the prince and his men find them. Master Doman is arrested for treason. Yzer who was hidden embarks on a epic journey, meeting new friends, fight enemies, save his master and try to convince people that magic isn't evil.
This is the story of Yzer and how he became a legend.