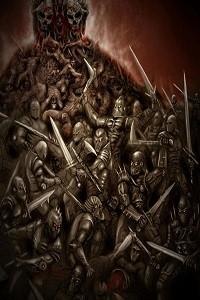 The Blood God Series Synopsis :This Story takes place in the world of Arsha. Clash of kingdoms , empires, and various religious cults have shaped its bloody history. The story follows Aren, a young man, gifted by the gods, as he struggles to find his way, in an era when the prophesied Blood Prince will rise to bring chaos to the realm.Part 1 : The Blood Prince ( Ongoing)One faith has dominated most of Southern Garlan for thousands of years. Though most of the continent now follows it, there are still several nations unwilling to submit. The believers and non-believers have been fighting a never-ending war for centuries, but neither side has managed to completely dominate the other. ----- But everything is going to change as the peace that had existed between two of the most powerful nations in Garlan, now lies in tatters, threatening to start a war between beings holding the power to wipe out all of the humankind. At the same time, various cults are on the rise across the realm in anticipation of a powerful figure, prophesied to rule over all of Arsha.The synopsis and title are under construction and might change in the futureI do not own the cover art, all credit goes to Gixajin on DeviantArt. Warning : 18+ stuff ahead