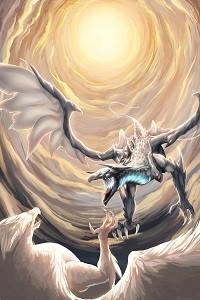 A land once ruled by dragons, a peaceful place without war or strife, was thrown into chaos by a dragon that betrayed his own. The war brought upon by this betrayal did not last long; but in its aftermath, many races were enslaved and a few had even become extinct! Then, the Betrayer and his army just disappeared into the West, leaving the East in shambles. Now, signs of a prophecy told before the war ages ago, started to appear at the same time the armies in the West are starting to stir again with the promise of bloodshed, war, and death. The final sign that the time of the prophecy has come, a prophecy that says:“A boy will be born unlike any other, his destiny is to destroy or save the world, his choice to make or break it.”Join this boy's journey and see where his great destiny leads him. Will he choose to save the world, or will he become the incarnation of destruction itself?! Warning lots of blood and violence. There will also be some sexy time ; )Thanks to Vocaloid for editing the synopsis a bit.A great thanks to Shimitsu for the awesome cover pic! Please check out his other works.