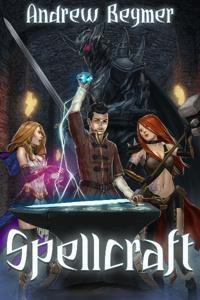 This is the revised and rewritten version of Spellcraft!
Explore the world, meet new and interesting monsters, and kill them for their loot.
It was a tale as old as gaming, and it bored Conlan to death. He always had more fun finding little chinks in a game’s systems. He loved figuring out how to exploit those systems and turn them to his advantage.
And ever since the release of Lotus, revolutionary hardware that finally delivered the dream of stepping into a fully immersive VR world, he'd had more items on his game breaking agenda than ever before!
Lately he’d been using those skills to mess with Horizon Online Entertainment. He figured screwing those bastards over was the least he owed the corporate pricks for killing his sister in one of their Lotus VR modules. They had too much money to face justice from the courts, but he was hellbent on destroying them in the court of public opinion!
Only there’s only so much he can do to fight Horizon from inside their games, and a whole new digital battlefield is opening up: Lotus Online. The greatest and most immersive VRMMO ever created, the ultimate expression of the Lotus hardware made by the masters who created that hardware, and Horizon is trying to invade that new world and take it over the same as they’ve taken over everything else!
Yeah, not if Conlan and his best gaming buddy Kris have anything to say about it.
Because Conlan has a secret weapon. He’s discovered something in Lotus no one else has: Spellcrafting. The chink in Lotus’s armor. He's always loved crafting, and he's discovered a system that might just allow him to take over the game world, kick Horizon out, and hit them right in the bottom line in the real world. Assuming he can survive all the invading Horizon bootlickers trying to kill him long enough to pull off the greatest exploit of his infamous game breaking career!
Spellcraft is a 225,000 word GameLit novel that is totally finished. New chapters are released every other day!