Isle of the Extinct 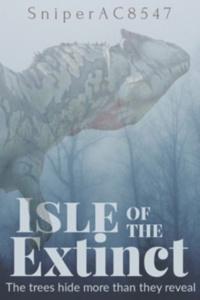 A ragtag gang of survivors, scraping out a living in the jungles of prehistory.
An apex predator, hardened by the wild and viciously defending his throne from competitors and the elements alike.
A strange, unnatural liquid, lurking in the cracks and cobbles in the earth, taking its toll on the world around it.
The remains and relics of an ancient yet advanced society, whose greed and ignorance led to the downfall of their most prized creation.
One mystical link connects them all.
A mysterious island, shrouded in mystery and sinisterness, revealing horrors beyond the teeth and claws of its saurian inhabitants.
Man and Beast collide in an epic arms race for survival on the ISLE OF THE EXTINCT!

PRAISE FOR ISLE OF THE EXTINCT:
"There is real effort in skill being put into this and it is unlike anything I have ever read on this site...9/10 would recommend...
"...fast-paced...incredibly descriptive...give yourself a ride into this thriller!"
"...writing style is amazing..."
"Excellent! I want more!"
"...fleshed-out characters..."
"Effective and well-written imagery..."
"...top-notch description..."
"Anyone who is even remotely into science fiction and is not reading this is missing out..."