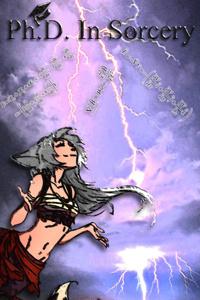 Follow Anastasia, the unlucky physicist turned wizard, as her reality gets turned upside down and she is plunged into a world of gods, magic, swords, and adventure. Short and sweet description, anything more would be a spoiler and I detest those.
Now, what you can expect from reading:
This is my first time writing, or better said allowing someone else to read that mess so don’t raise your expectations too much. Still, I will try to keep the story flowing, while also devoting as much time as I can to editing. In my opinion, the story is written at a faster pace than normal with time skips here and there, as more happens in the first ten chapters than I’ve seen in other web novels happen in fifty.
I will do my best to not allow the faster pace to ruin the story by using those time skips to raise the skill of the main character. I am mainly looking for feedback while I test myself in new and unexplored waters. I did put a lot of thought into worldbuilding and the magic system, it is something that has been mulling inside my head for years before I sat down to write anything down.
First and foremost I am an engineer and not a writer. I will try to do my utmost to make the world logical and consistent, but sometimes I might not express that in a way that’s clearly understood. I have a rough outline with several possible endings, but the story will change and evolve as I do. But in case I have to stop for whatever reason, the story will get an ending. It will be done even if I have to send coded messages from a bunker.
I am a big fan of the Dresden Files so you can be certain that everything mentioned will in most cases be used, with a few red herrings sprinkled in the mix. But that also means I will enjoy putting the main character through the meat grinder while I eat popcorn and laugh from my evil lair.
Physics, and to be more precise electromagnetism, quantum field theory, general and special relativity are very interesting topics for me that I research in my spare time. That means that the premise of the story will be using that research to bring logic to magic. Stupid I know, magic is magic, but to me, there is no reason why there shouldn’t be a concrete set of rules there. But it is still magic and that allows me to play with some things that shouldn’t normally be possible.
I will focus on evolving the main character and having her react as anyone normal would, from my perspective. There will be scenes of battle, gore, and sexy times, but I will not go into too many details, counting on your imagination to fill the gaps. There will be plenty of combat, even battles ranging from a few dozen, a hundred, and thousands of participants.
I could go on but there isn’t much to say that would convince anyone to read, either you thought the title was cool or you liked the poster. Or not, but after several days in photoshop, that’s the best I could do. And the title was originally Sorceress with a Ph.D. The new one makes a little less sense but I like the ring of it more for some reason. I just hope someone enjoys what I write as much as I do. In the end that is the reason, I am doing this, because I enjoy putting my thoughts on paper and seeing the outcome.
Credit for the art: https://www.artstation.com/artwork/e0o8nw