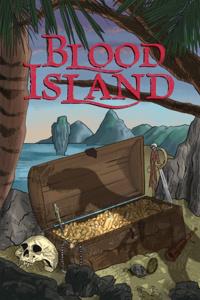 So far, life had done Nuriel Cunningham no favors. The orphaned daughter of a petty thief, she's had to grow up on the streets, with nothing but her wits, her late father's advice, and whatever luck she can scrounge up to keep her alive.
However, now that luck seems to have ran out. After being discovered passing as a boy on a ship sailing the Caribbean, Nuriel is blamed for the ship's troubles and thrown overboard, seemingly to her demise. But rather than die, she awakes on the shores of a strange and terrifying island, one inhabited by monsters from a bygone age. Now she has to use every bit of cunning and skill just to stay alive, as one false step could cause her to be torn apart for some ancient creature's dinner.
But as she works to stay alive and uncover the island's secrets, she becomes aware of something very troubling. There is someone else on the island, someone not quite human, a creature with glowing red eyes watching her from the shadows. And though the creature seems benevolent, perhaps even friendly, Nuriel is not about to let her guard down. After all, every stranger is an enemy, and there is nothing more dangerous than the attention of another person.