The Chronicles of Gravehaven: The Eighth Tier 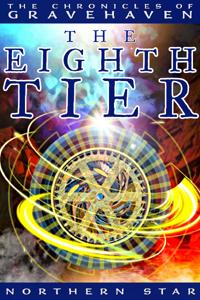 Years ago, the kingdom of Elia was on the brink of annihilation from an invading enemy. Until the unthinkable happened: the god Eo appeared in the realm. Empowering Elians with the gift of magic, they drove back the invaders and formed an empire of their own.
They chose the first of all the sorcerers as their leader: the Autonach. From then on, the greatest of all the sorcerers is chosen to become the Autonach and the leader of the empire.
Shai is not the Autonach.
He’s too young, too reckless and his skill with magic much too weak. But he does have one ability no one else does: he is plagued by terrible visions of an impending catastrophe about to strike the kingdom… and someone out there in dire need of his help. Overlooked by the others and desperate to prove himself, Shai travels across the empire to take on the danger himself.
But Shai will soon realise there is more to deal with than a series of deadly curses: he must also face the machinations of hostile royals, repel an invasion from across the sea and conquer his own inability to master magic if he wants to save his people…
And then maybe, just maybe, he will become the Autonach himself.