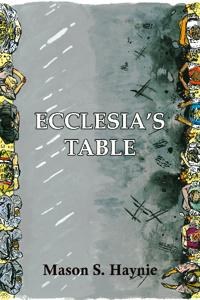 The world is a wasteland. It always has been. Moshe, Amaru, and Reenu have never known anything other than the desert that raised them, but when rumor arises that something other than what’s familiar could be out there, the three of them make haste for an abundant future. Upon arrival at the impeccable city known as Ecclesia, the group quickly learns how and how not to get along there. The trials and social politics that Moshe, Amaru, and Reenu face teach them that some rules are useful and some are meant to be broken.