RE: THE TEAM, A PARTY ISEKAI 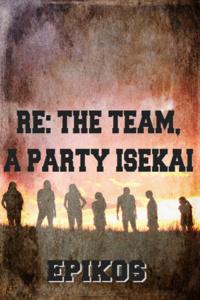 Whichever whisper you believe, child, humans have lost control. The Wurm burrows nearer to the center of the realm. The land’s magic unravels into decay and disorder. And all is dying unless the dying turns metal.
Rick, a poor teen with dyslexia and ADHD, is failing out of his senior year. Despite his problems, he focuses on celebrating his six friends who are teenage rejects and rebels like him. They drink, jam out, get high, and live like there’s no tomorrow, and for Rick, moments like these are cherished dearly. They give him a sense of purpose. But then a blue computer prompt crashes the party with a message: S-s-system b-booting…
Suddenly, the lives of Rick and the Team are violently stolen from them. A glitchy system drafts the teenagers to a new world where a monstrous force called the Mecha Wurm God is turning creatures of medieval fantasy into metallic cyborgs. All to rage war to take over the entire world. It’s Rick and the Team’s job as prophesied heroes to stop it and save the denizens.

But these teenagers should be last on anyone’s list of chosen heroes. The Team consists of a maternal zealot, a klepto critic, a manipulative flirt, a psychotic mute, an oafish goth, a lost nerd, and Rick, a distracted fool who's leading them. To send this ragtag group of misfits is nonsense. But if they fail, they’ll die repeatedly. Over and over again. Because this is a difficult death-loop adventure where quitting isn’t an option no matter how much they rage and lose their sanity.

Dear reader,
This is a soft LitRPG, character-driven action-adventure romp. Less crunchy, more fun.
And, FYI, this story has…