Beneath the Fallen City 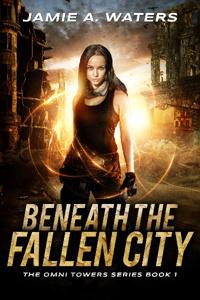 On a ravaged Earth, Kayla survives by using her uncanny ability to locate tradable artifacts in the rubble. But when someone starts hunting her, she'll be forced to team up with her biggest rival...
A riveting dystopian adventure with a supernatural twist!

Some secrets are better left buried...
Kayla is a scavenger, driven to search the ruins of abandoned cities for artifacts in exchange for critical life-saving supplies. But, the rarest artifacts are found in the most dangerous ruins—those under control by the OmniLab traders.
Carl is one of those traders—and Kayla’s invaded his district. He’s determined to stop her and the best way to do that is to recruit her. The only problem?
Kayla hates traders.
When a powerful man intent on revenge starts hunting her, Kayla realizes the only way to save herself may be to accept Carl’s offer. But that would mean surrendering to OmniLab and giving up everything she knows.
Only everything isn’t quite what it seems.
Including OmniLab.
And Kayla’s in a lot of trouble.