The War of the Eight 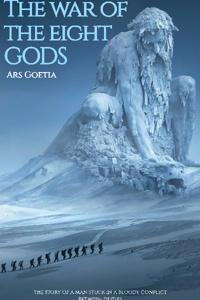 Berthold Odenheimer died alone, misserable. The Gods, gave him a second chance, along other six thousand people on a similar situation. What they didn't tell him however, is that all of those brought there were simple pawns in the chessboard, pieces without importance that could, and would, be easily killed in this little game between deities.
He decided he didn't want any of that. That his previous life had already had too much passivity and following orders. No, he decided that, god or not, they would not choose his own fate. So he sided himself with the outcast of the Eight Gods. A girl that looked like a porcelain doll, but had a resolve that could topple empires.
This is the story of those two, and all the people that decided to follow them in search of something bigger.

[ Notes: i'll try to do big, chapter sized updates weekly (3k-5k words). English is not my first language and this is my first time writing on it, if you could point out faults in the language that'd be appreciated. So are critiques of any kind, as this is the first story that im sharing with others ]