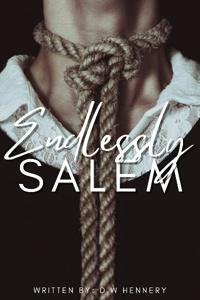 Cassandra Wildes had died in Salem, Massachusetts in 1692. When the noose around her neck delivered her a short, promised death, she had opened her eyes again and the year was 1778.
Cassandra Wildes was cursed the night before her death by a woman with bewitching eyes and a similar death sentence, and has lived in over two thousands lives across the expanse of human existence. From the time of the cavemen to the year 3120, Cassandra Wildes has been cursed with immortality that originally seemed like a freedom away from death.
She has been utterly alone in these two thousand lifetimes until Roger from the year 2019 jumps in front of a bullet meant for her. She dies just moments after him, only to wake up in Salem, Massachusetts with Roger at her side wondering why they are in the 1400's,
Outlander meet Hocus Pocus meets Pirates of the Caribbean in a tale of reincarnation, guarded hearts, and swash-buckling adventures.