The Flying Tooth Garden Volume 1: The Jungle Tomb of the Ice Queen 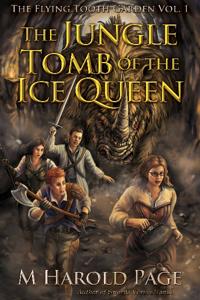 From mild-mannered monk to lethal swordsman! A wild LitRPG quest to help a lost love defeat the God of the Flying Tooth Garden!
Torstag doesn’t just see dead people, he is dead people: dead heroes. And they whisper to him, sharing skills, nudging him into dangerous deeds… and also binding him to the sorceress Zahna.
Escaping the living death of a monastic prison, Torstag plunges into Zahna’s life and death struggle with a particularly creepy Dark Lord.
Now there are bounty hunters and minions to defeat, insanely dangerous dungeons to delve, new cultures to negotiate, and Torstag badly needs to level up.
How much should he let the dead tell him what to do?
(This will published by LevelUp later this year. However, I have permission to share at least the first half of the draft as I polish it in the hope of getting some feedback so I can tune it up before it goes out into the wider world. )