Getting reborn as an Orc 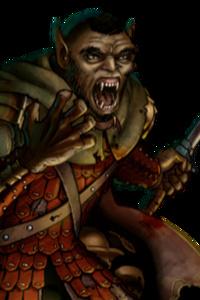 MC gets reborn as an orc. He is going to grow in strength, going to gather his followers build up his clan then crash, slaughter, and humiliate the humans, elves, dwarves, and such.
This is a kingdom building story with litrpg elements. Litrpg works well when we talk about single character focused story. But in my story MC eventually going to lead his troops against other people. So I invented something called the tier system.
It is similar to the grading system other game light story's use but with much more clear and understandable rules, also uses a very simplified stats system. When you hear someone's tier you could easily understand what to expect. MC is a crafty guy, he usually uses tricks and shady tactics instead of brute force to achieve his goals. He gets ailed with unsavory humans to reaching his aims. So MC going to have a lot of dealings with society's criminal underbelly.
I warn you, my English is miserably bad. If you seeking a kingdom building story with a crafty villainous lead who outsmarts his enemies you are in the right place. If you seek something written by someone competent in English please pass this story and please just don't write a review.