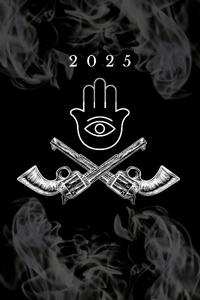 On the 23rd of October, 2024.
Thousands of reports of disappearances all around the globe shocked and sent terror among the people of world 206.
That people just vanished out of nowhere, their locations not caught on cameras and their reasons for leaving largely unaware.
Except, for the notes, left inside their homes.
A note shortly revealing their, and later convicted, inhuman crimes.

But These strange events and similar ones, however, are found written in great detail in Mackenzies Zillers' unpublished novel, a young writer in the year 2024.
But in horror, the next pages in this 15-year-olds novel depict much more chaos in the year to come, 2025.
A dystopia, discord, and blazing fires to take a hold of the world.
She depicts a change, the final turning point for morality, forgiveness
A day of change, judgment for the people on earth from a creature never seen before.
But just days before her spark of popularity outbreaks, she goes missing.
And an unknown creature, days later, is sighted