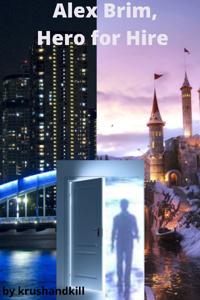 Follow the two lives of Alex Brim on Azurath and Sakamo Ryu on Earth.
On Earth, he is a fifteen-year-old boy with ascendency of English-Japanese. His father was English, and died before he was born. His mother was Japanese and died of tiredness when he was three, trying to keep two jobs to grant him a house and food, after his father’s death.
He is a Part-time worker and has a lot of secrets that grants him an easy going life as a High School student.
On the Magical World Azurath to where he can travel by using a magical pendant, he is Alex Brim, a Hero for hire and a Mage Summoner, a rare evolution of a Mage that enables him to make contracts with different Spirits of the elements and use their powers. His help is needed from time to time, because of the Magical Voids that appear in the sky from where Monsters fall, making the lives of the different species that lives there, a very hard one.
…

Alex shouted to the Orc, surprising everyone:

The Orc let his hostage go that fell on the ground with a muffled bump. The Orc raised his mace to the sky and screamed, giving the signal for the Goblins to attack. At the same time, Alex whispered:

A small dot of light near his right ear answered in a low voice: