Dispatch From the Valley of a Thousand Punches 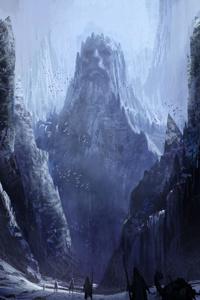 Folks in Eldenhills would tell you that they lived in a quiet town.
Some might say a boring town, but they would risk a good kick to the head.
The mountain range surrounding Eldenhills were forbidding, none more so that the Dark Peak, a dormant volcano with a black summit.
Folks in Eldenhills were unusually violent, which is why the area was known as the Valley of a Thousand Punches.
They worshipped Bahram, the mountain god.
They believed that after thousand of years of stone rains and firestorms, Bahram had sated his hunger for destruction and had gone for a long sleep, deep in the heart of the Dark Peak.
They were wrong.
Bahram had just started to wake up.