Squire of Eden 1: The Tooth of Leviathan 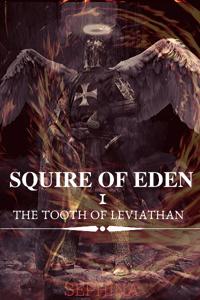 The Tooth of Leviathan, The Claw of Behemoth, and the Feather of Ziz --the sceptre, crown, and cape of evil to unite all evilness, a symbol of power for the anti-christ, remains a threat to the balance between the human world and the realms beyond."Humans are humans, all the good guys are up in heaven, and we're all stuck here before some of us go to hell and purgatory. Right? Sister?"
Back in 2011, 12-yr-old Macau resident, Sariella Lui could have never imagined this world beyond her acknowledgement. Reuniting with her long-lost twin brother, Sariel, the teenager got to know about the mysterious world of angels, demons, mystical creatures and the Sacred Order of the Paladins of Eden.
Together, the siblings fought alongside the fallen angels for their redemption, with the help of their companions, in hope to restore balance within the realms beyond the very world they live in.
At the same time, the outcasts struggled to find their position in this world. The young Russian psychic, Nikolai Rostov, struggled to find a cure for his curse while Ezov, the offspring of Prince Seere of Hell and a fallen watcher, struggled to understand the responsibilities of his blood. Lukas the cambion desired to leave his father, Belial, one of the nine Kings of Hell, but his demonic origin made him an outcast at the paladins, not to mention the fact that they were a total mess.
As the youngsters grow into young adults, their battle continues, and this is merely the first step.