The Eye of Isaac 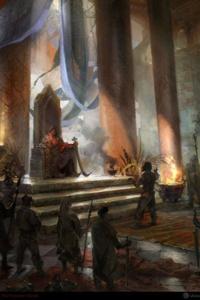 King Richard Lionheart sets his sights on the kingdom of Cyprus. In a desperate attempt to stand up to the Crusaders, King Isaac calls upon the help of an infamous wizard to help save his kingdom. Lucius, a young boy who's only ambition is to alleviate his own boredom, will shake the tides earth to fend off this new threat. But as the invasion commences, Lucius will meet trials no man has ever faced before. He'll be one wizard fending off an army of Crusaders, witches, and demons, all for the sake of a maddening king.
Lucius the demented sorcerer, the sole defender of Cyprus, the killer of Crusaders, the necromancer of demons, the star saint of the peasants. Lucius doesn't realize it yet, but this war will immortalize his name in the history of Europe forever. He'll be remembered as a hero, an omen to the Christian kingdoms and the right eye of Isaac, the mad tyrant of Cyprus.