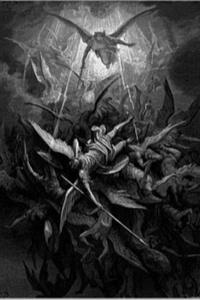 Perhaps the most well known of all devils, demons, or fallen angels is the one known as Lucifer, Satan, the Father of Lies. The cultural influence of this figure throughout history is by no means small. Despite that, it wasn’t until the time of Milton’s classic – Paradise Lost – that we saw an attempt to portray a dramatized version of the events leading to this figure’s fall from grace and power. And while this is the case, Paradise Lost is not about Lucifer – though it goes into great detail about his potential musings. No, Paradise Lost was, and still is, about the fall of mankind. So, in light of this, and the feeling that the classical story deserved another telling, I present to you all The Fall – a story focused particularly on Lucifer’s fall from grace and his musings both before and after.