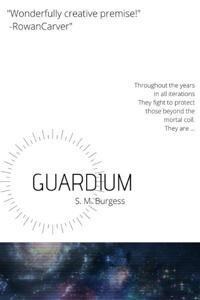 Year 3184
Science and the divine are forced to share a universe to the highest bidder. There exists friction between them, and caught within their pull stands an Earth ravaged by an apocalyptic event. A human named Illian Jones, dissatisfied with his day job, desires something bigger than himself. Divine forces were listening and answered in the form of humankind's savior, Gaia who is in need of a voice: a Messenger to speak on Her behalf.
They call their kind the Guardium in all iterations.
When humankind is deemed unfit to safeguard Gaia from outside threats, Illian must unify his people against an ancient protocol which seeks to reclaim their planet in marshal law.

They call their kind The Powers in all iterations. And they know only one thing: [Complete Extermination.]

Guardium is Science Fiction like you've never read before. Meet legendary figures, engage in exciting warfare, and learn what it means to be one part of a bigger whole. The perfect cross between Star Wars, Mass Effect, and Greek epics such as The Illiad!
Also on Wattpad and Tapas.