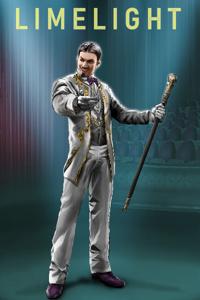 Puck Mallory has devoted his life to the thrill of gambling. Cards are his game of choice, but anything that has an element of chance, skill, and a bit of clever manipulation have always allured him. When a round of poker with members of a planet-dominating crime syndicate goes wrong, he finds himself forced into a new kind of game - LimeLight.
LimeLight is a virtualized gameshow hosted from solar systems far out of the reach of any government authority. This underground competition invites death-row prisoners, debtors, professional assassins, criminal operatives, and veterans of countless galactic conflicts of the five prime alien races to pit themselves in a myriad of deadly "rounds" to gain freedom, wealth beyond measure, and intergalactic notoriety.
Something more sinister than gladatorial combat lurks under the surface of this gameshow. Genetic alterations and cybernetic augmentations are commonplace in the galaxy, but rumor has it LimeLight takes them to a whole new level - using failed competitors as their test subjects. Will Puck die on live broadcast for the entertainment of millions and end up a lab experiment, or score the jackpot of his life?