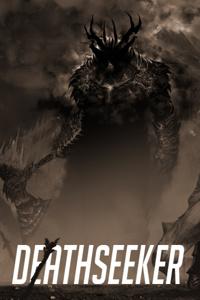 Satan's Axe...Lord of High Honor...The Immortal Giant...The Black Maelstrom...Son of Thunderfield...The Gods' Retribution.
Dalric had many names. None were as fitting as his last, Dalric the Deathseeker. Born from an unwanted mating between the greatest warriors of the time, death was his only true kin. It birthed him, molded him, and now standing in the middle of a lifeless battlefield, it drenched him. The blood of thousands of soldiers soaked his skin. Two hundred thousand men approached him that day. All of them sought his life, none of them left with theirs. But they would not die in vain, they had accomplished their mission. Hidden beneath a thousand layers of their blood, was Dalric's very own.
Feeling his life fade, he gazed weakly at his work. A seemingly endless array of corpses laid battered and disfigured before him. Some bore faces of horror, most had no face at all.
His most trusted companion floated in front of him, blocking the view. Waves of sorrow flowed between them.
“My time has finally come. I’ve begged for death and it’s finally arrived. My work is done...and so is yours. You’re free to be who you were meant to.”
With his contract with the gods fulfilled, they were truly free. The centuries of torment would end. No longer would they have to walk the path of a monster.
Little did Dalric know, the devil was in the details.

Guaranteed chapters on Fridays 2pm EST
Bonus chapters on Saturdays 3:03am EST and/or Tuesdays 6:06am EST