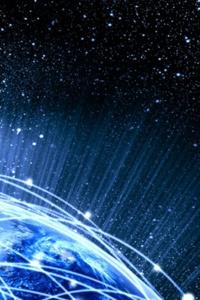 Twenty Years ago, The Global World Network launched, an initiative to create a new and advanced form ot network, adapted by all technology and usable by everyone, and creating an entire new system. It would help bring people together, and open the possibilities for humanity. Billions celebrated its launch, with major expectations.
And then, on January 1st, GWN Launched, and everything changed. The moment it was let out of the box, it could never be put back in. The world changed in such a way that few believed could even be possible. Strange digital lifeforms were created, but many of them ended up being Viruses, which caused destruction and chaos. Certain skilled inviiduals were capable of making Programs that could have massive effects on the real world, and create things that were thought to be the realm of fantasy and magic. And an entire world, parrallel to earth, was created, called the Cyberworld.
And the Cyberworld would automatically link to all devices, including essential ones, and was everywhere. To disable it, one would have to shut down all electronic devices, all machines, all across the world and more. Even the moon and mars, which had just established colonies, were affected by the GWN, so even going into space, it would still be there. And perhaps affecting the electrical brainwaves of those born after that day, but children born would have a slightly better understanding and perception of the viruses and Cyberworld, how to access them, use them, and such. A skill that must be honed as a child or one might grow out of it, these children began to prove to be a source of hope in this new world.
And among them, occasionally those were born with a special connection to the Cyberworld. They could enter it with their flesh and blood bodies so easily, and had even more ability and access then others. And to them, the Cyberworld was both a place of wonder....and danger.