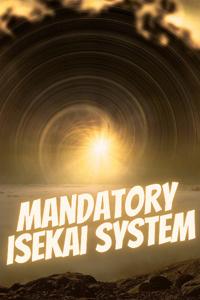 Dramatic Synopsis
If you had an opportunity, would you take it? Or would you simply pass by? A world where power is law, where power is justice. Would you grasp it? Or would you simply let it slip through your hands? Unsolvable problems suddenly become solvable with a bit of violence. Now, would you follow the story of an unlucky fellow called Ash Ashburn as he struggles against his destiny to grasp his foothold in an alien world? Where power is law, where power is justice. Where the only crime is possessing a treasure without having the strength to defend it. Where the familiar snickers of foreign enemies echo in every direction. Where the only light is given by an unknown Mandatory Isekai System. Now! Let us descend into a mad world where logic is without reason.

Alternative Synopsis
Guy gets run over by isekai truck, naturally he gets transported to another dimension. You already know this process let’s be honest here you degenerate. The next step being that this guy gets the Mandatory Isekai System in exchange for dying to the isekai truck. I know, I’m pretty creative huh. I shock myself sometimes too, not gonna lie it kinda feels unpleasant.
So, this guy wants power, so he becomes a drug addict on pills as well as a murderer. Oh, but don’t worry, it’s ‘Cultivation Pills’ and his victims were in the way a bit. Stepping stones and such. I mean what else are you going to do? Talk it out like normal humans. Hahaha. Absurd. Don’t worry I’m not just saying ‘Hahaha’. I’m actually laughing in real life too, funny guy.
So, what makes this story different from others? Umm, dunno really. Perhaps this half ass summary? Or maybe old men wanting to show children their ‘Martial Technique’? Guess you’re gonna have to read it in order to find out, or do I have to lure you in with candy? Please don’t be the second option, I have no self-control.