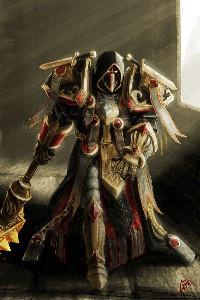 Elijah lived the full, blessed life of a successful general. He was known for his awe-inspiring valor, the wisdom with which he led his men, and the integrity that governed his actions. A grand paladin of unequaled strength and conviction throughout all of history, his presence brought stability to all nations.
Then came the Demon Dawn and his worth was truly proven. Kingdoms fell and millions were slain, but Elijah and his ten thousand, cloaked in the full strength and faith of the All-Father, marched into Hell’s jaws alone and emerged victorious. Carried back on the shields of his remaining Honorguard, his glorious sacrifice heralded an imminent era of peace that would last generations.
Now, a thousand years later, a resurgence of demonic strength is brewing in the shadows, and the kingdoms, once heroically led by men of virtue, have fallen into corruption and forgotten the Faith. Seeing evidence of the impending doom from the stars, and entreated for intervention by a sole devout believer, the All-Father decides to answer that prayer and demonstrate his might by sending a lone soldier to save all of creation.
Elijah of House Solwarden, the Demon's Bane, Heavenblessed, last Grand Paladin of the Order of the Golden Host, returns to walk the earth once again.