Rise of the Weakest Summoner 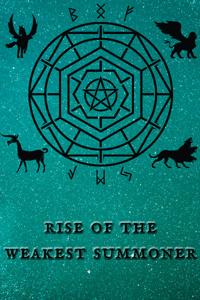 One fateful day, a caravan was passing by the village of Teira, which has been raided and set ablaze by bandits. Within the burning rubble, a young woman found a baby, a sole survivor of the attack, and decided to take it with her and raise as her own. As she was leaving with the little child in her hands, two falling stars lighted up the night sky, and she named the boy Asterios.
Years passed and he grew up in a caring and warm home, developing a passion for all magical beasts, choosing the path of a Summoner as his way of life. While his love and knowledge also grew boundless, his practical abilities clearly pointed out his complete lack of compatibility with that school of magic, but he never wavered in his resolution.
Follow Asterios as his life of perpetual failure and bullying suddenly takes an unexpected turn, after just seconds short of his death, a powerful summon answers his call and saves his life. Wait... doesn't it look like... A GIRL?! Are those animal ears and tail?!
★━━━━━━━━━━━━━━━━━━━━━━━━━━━━━━★
Release schedule: Daily chapter until we catch up to other sites, then -> Can't guarantee a stable schedule, my other novel still takes priority and I'm currently on last year of my Master's, but at least once or twice a week.
What to expect:Fantasy adventure with an MC devoted to summoning magic and fantasy beasts, slowly getting rid of his title of the Weakest Summoner (sudden strength gain, but with progressive development), lots of exploring, magic, encounters, lots of character development and what's the most important, a nice harem of lovely Monster Girls! And perhaps, some occasional lewds from time to time when it fits the moment ( ͡° ͜ʖ ͡°)