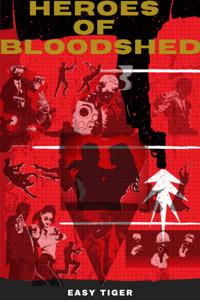 Sierra Rico is a legendary killer, trained from childhood to become the personal assassin of South America's most ruthless drug lord. But after finding love and then having it cruelly ripped away from him by the sins of his own past, Sierra is desperately trying to escape his old life, free from the horrors he grew up with. Now he is relentlessly being hunted by the very drug cartel that raised him, past rivals seeking vengeance, professional hitmen and an old nemesis who refuses to die until Sierra has suffered to his last breath.
Kenji Kojima is a spoilt young heir to a worldwide Yakuza criminal empire, betrayed by his own jealous brother in a bloody rebellion to seize power. On the run and cast aside by the very men he was meant to lead, Kenji must shed his lazy playboy persona and become the warrior he needs to be in order to slay his brother and take back what was stolen from him.
Fido is a mysterious vigilante without a past or a home he remembers as his own. He has dedicated all facets of his life into hunting down a psychotic posse of Voodoo-worshipping killers who left him for dead. He kills without mercy, seeking not only vengeance, but also the aswers as to why he was targeted.
In Panama City, Panama, a thriving metropolis brimming with corruption and on the brink of a massive international gang war, the fates of these three men will crash together in an epic tale of revenge, redemption, and bullet-riddled bloodshed.