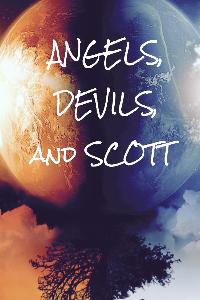 Scott Rivers: your average guy. He’s got a little shit of a younger sister, an embarrassing mom, and a taste for 80s movies and playing the trombone.
He also happens to practice summoning demons with his uncle. So... yeah, maybe not so average.
After a ritual gone wrong, a devil named Scarlet was able to enter the human world to recover a powerful demonic artifact. But after a robbery, she’s been stranded in Scott’s world... and she’ll need his help to survive.