How To Avoid Death On A Daily Basis 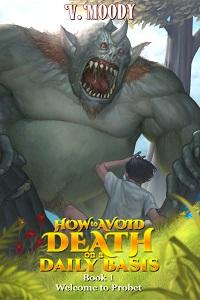 What if you were transported to a fantasy world with no special abilities, no OP weapons and no status screen to boost your stats? Never mind finding the dragon’s treasure or defeating the Demon Lord, you only need to worry about one thing—how to stay alive.

A group of young Brits wake up in a strange, fantastical land with creatures from myth and legend. They are given archaic weapons they don't know how to use and told to do their best.

Convinced it has to be some kind of virtual reality RPG, all the people summoned form parties and set off on their adventures, leaving behind the people nobody wants in their group.

Story of my life, thinks Colin.