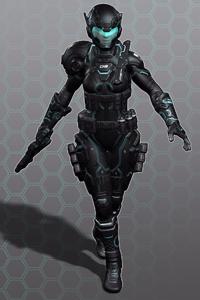 In the Distant Future War is the only Diplomatic language between the several stellar kingdoms and nations. Where the stakes are the limited Earth-like and teraformed planets scatered among the stars. Earth has long become a shadow of its former glory its governments and enviroment long decayed, destroyed by polution and war.Those with old ambition still try to claim it as an excuse and symbol for the right to rule all humans. The poor are poorer and the Rich rule planets like coperations taking all they want for profit.
Torn from her family as a baby Asandria Ester A.Tanoute aka Asa has been found and brought back, as the current eldest of her generation there are exspectations thrust upon her. Thinking herself an orphan her whole life she has bitter sweet feelings for her new found family. She now takes her first steps to infamy and renown as the fragile peace of the last decade shatters on the cusp of the Delters War(War of the poor against the privileged) which turns into the Millennium Conflict. Will her morals and humble beginings be twisted as she exsperinces a life of luxury and war.
Romance, Adventure, Army building and business and kingdome management are also story elements.
The pictures and illistrations on the cover and book do not belong to me I will remove them on request of the owners.
Releases 1-2 a week depending on how much time I have. Patreon may be in the future depending on support, it will include maps of cites/battles and planets and of hidden information and extra chapters.
This is my first book don't be to hard on me ill try my best to be and get better.
Ps:Gender bender tag is for a plot devise the protagonist wont ever physicaly change gender depending on your view ill leave you to decide later.