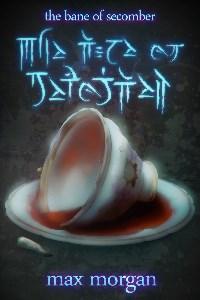 Following the mysterious death of her father's prize-winning pig, keen reader Cerys Jones teams up with local lawman Diero Astorio, to find the culprit. Along the way, however, she uncovers a conspiracy that threatens to shake the very foundations of small-town life in Secomber.
A series of cryptic clues left in a book about the famed mage, Blackstaff, and a lone wizard in red take Cerys on a bizarre journey exposing the idyllic town of Secomber to be nothing more than a den of greed and deceit. Things in Secomber are about to change for good, and if Cerys can't unmask the wizard in red, they might just change for bad.

Set in Faerûn just prior to Scourge of the Swordcoast.